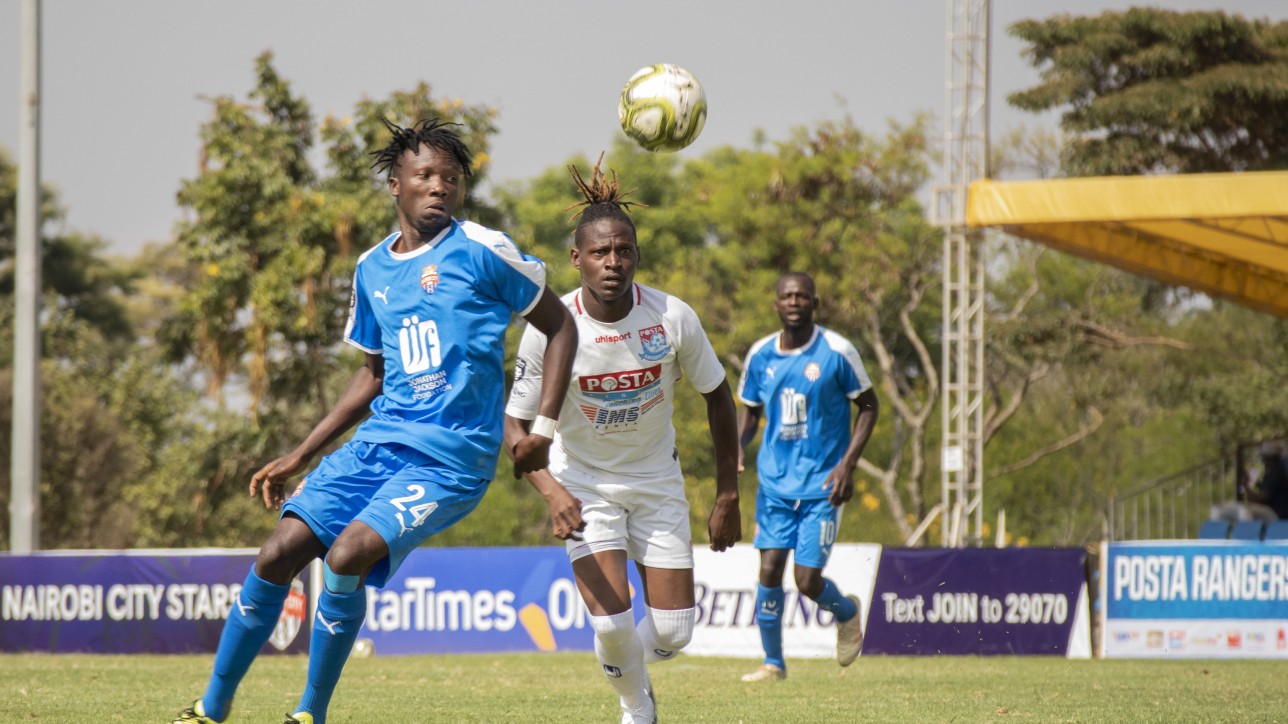 Nairobi City Stars came from behind to tie Posta Rangers 1-1 in a seventh round Premier League clash played at Kasarani (outer) on Friday 8 January 2021.

Peter Pinchez Opiyo scored in the 54th minute for Nairobi City Stars to cancel out a 45th minute goal by Jackson Dwang to confirm a share of spoils against Posta Rangers for the sixth time in nine Premier League games since 2010.

Posta Rangers survived close shaves in the first quarter thanks to deft goalkeeping from Jairus Adira.

He had a triple save in the sixth minute denying Erick Ombija who sniffed at goal after connecting to an inch perfect delivery from Pinchez. Follow up rebounds from skipper Anthony Muki Kimani and one more by Pinchez were all stopped by the keeper.

The near misses set the tone for the game and just a minute later Pinchez attempted a near post shot off a corner that Adira once again stopped as well as a 13th minute connection from Sven Yidah off a Herit Mungai pass from the left.

Steve Njunge in City Stars was called to action five minutes after when he dived the right way to force a fruitless corner off a Dennis Oalo pile driver from a distance.

From the half hour mark Rangers gained momentum in the game and in the 35th minute Dwang had an attempt on goal only for his header to go straight to Njunge’s arms.

A minute later Rangers skipper Joseph Mbugi sent homeward a long ranger only to weave wide at the far post.

Three minutes on Dwang also had a similar attempt and the result was the same. He was not to be denied at the stroke of half time when he directed a Francis Nambute cross home from a tight angle for the opening goal.

Nine minutes into the second half stopper Salim Shitu Abdalla skied a shot. Just two minutes later it was all even when Erick Ombija powered a header goalward that Rangers keeper spilled for Pinchez to burry home the leveler. He could have registered his brace just two minutes later but Adira came out tops to stop his goal bound shot.

Davis Agesa, on for Azizi Okaka at half time, had a header sent out for a corner at the hour mark as City Stars continued to pile on the pressure.

Rangers had a glorious chance to double their scores had Njunge not tipped a fine cross from the left by Elvis Osok in the 80th minute. A series of corners for Rangers followed in the dying minutes but to avail.

The game was to end with a bizarre incident as Adira knocked down City Stars substitute Rodgers Okuse Okumu way out of his area to be served a second yellow in the game and marching orders. He had been booked earlier on in the 53rd minute for time wasting.

A freekick off that incident saw Agesa’s header from Pinchez’s dead ball fly marginally wide bringing the game to an end.

With the point earned, City Stars moved to the nine point mark but still maintain fifth spot as Rangers remain tenth with five points from as many successive draws.

Next up for City Stars is a game against Ulinzi Stars in Nairobi on Saturday 16 January 2021. City Stars midfielder Oliver Maloba on the ball in a 7th round Premier League tie against Posta Rangers at Kasarani on Fri 8 Jan 2021. Rangers captain Joseph Mbugi looks on