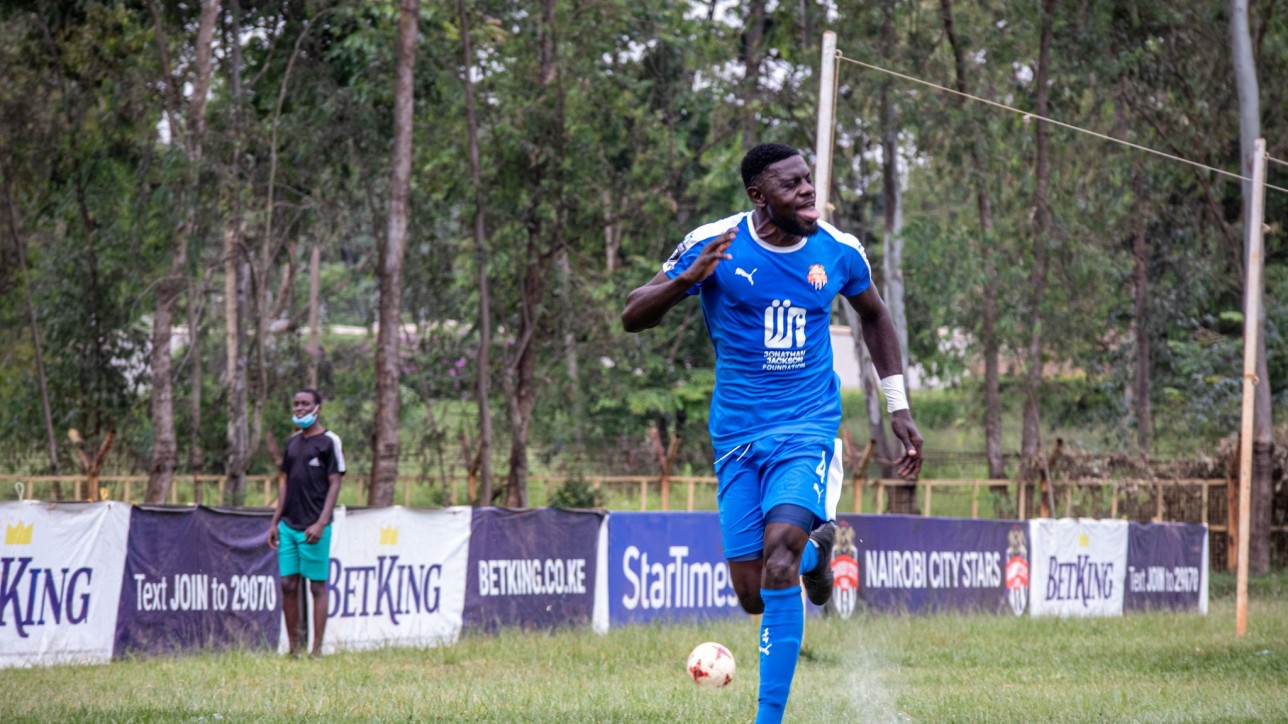 Nairobi City Stars registered a comprehensive 3-0 win over Sofapaka at Ruaraka on Monday 24 May 2021 to move three places up the log from 13th to tenth.

A Peter Pinchez Opiyo penalty in the second minute, a rebound tap in from Davis Beast Agesa at the quarter-hour mark, and a header from stopper Salim Shitu Abdallah in the 37th minute accounted for the rout.

Sofapaka had a disastrous first half as mid kingpin Lawrence Juma missed a penalty in the 30th minute awarded after a Bolton Omwenga handball.

It got worse just before the breather when their goalkeeper Aigba Moubarak received a straight red card for an off the ball incident with Simba wa Nairobi striker Nicholas Kipkirui.

City Stars had a similar second half as skipper Anthony Muki Kimani missed a penalty seven minutes into the second half that could have improved the cushion to 4-0.

The spot-kick was earned after pocket rocket Rodgers Okuse Okumu flew into the box after beating his markers only to be hacked down by Ambrose Sifuna. Sub keeper Kevin Omondi punched Muki’s kick back in play.

Late in the game, with six minutes left, City Stars were reduced to ten men after one of the most outstanding players on the pitch Seven Yidah was ejected after receiving a second yellow card.

In moving up to tenth, Simba wa Nairobi sent Bidco United and Sofapaka a position down to eleventh and twelfth. Both are on 19 points.

In the first minute, Nicholas Kipkirui smacked a header against the crossbar off a cross from the right. A follow header by Sven Yidah resulted in a corner that yielded a penalty.

Opiyo, who missed the past two games against Tusker and Gor Mahia, stepped up to slot home the spot-kick for his fifth goal of the season.

In the 13th minute, Sofapaka earned a free-kick from a good distance. Skipper Lawrence Juma had a go but it weaved wide.

Two minutes later action was on the other end. Okuse on the right burst into the box and fired at keeper Aigba. The Togolese shot-stopper spilled the ball and Agesa was quick to gather the ball with a tap-in to double City Stars’ advantage with his second goal of the season.

At the half-hour mark, Juma had the chance to half the deficit but his spot-kick hit the base of the upright to the relief of Simba wa Nairobi.

Seven minutes on speedster Okuse was checked by Sifuna who received a yellow card. The resultant free-kick by Bolton found stopper Salim who powered a header – his first goal of the season – to triple City Stars lead.

Soon after Aigba being sent off for his charge on Kipkirui. It forced the Sofapaka bench to sacrifice stopper Stephen Kola for reserve keeper Kevin Omondi.

The last action of the half then saw a Timothy Otieno shot for goal fly wide.

The second half started with Sofapaka bringing on Kilume Mohammed for Sebastine Sunday.

Within the next eight minutes, Sofapaka had brought on freekick master David King’atua for Timothy Otieno but could not account for two freekicks that all went out.

In the 77th minute, Juma saw City Stars keeper off his line and fired a high riser. But the keeper reacted well and backpedaled to force a corner from what seemed a sure goal.

In the 80th minute, Sofapaka forced back-to-back corners but all were fruitless while in the dying minutes’ City Stars substitute Elvis Noor Ojiambo fired wide.

With the win, City Stars earned revenge over the 1-0 loss to Sofapaka in the first leg.

Next up for Simba wa Nairobi is a round 19 clash away to Kariobangi Sharks on Saturday 30 May at Utalii grounds.