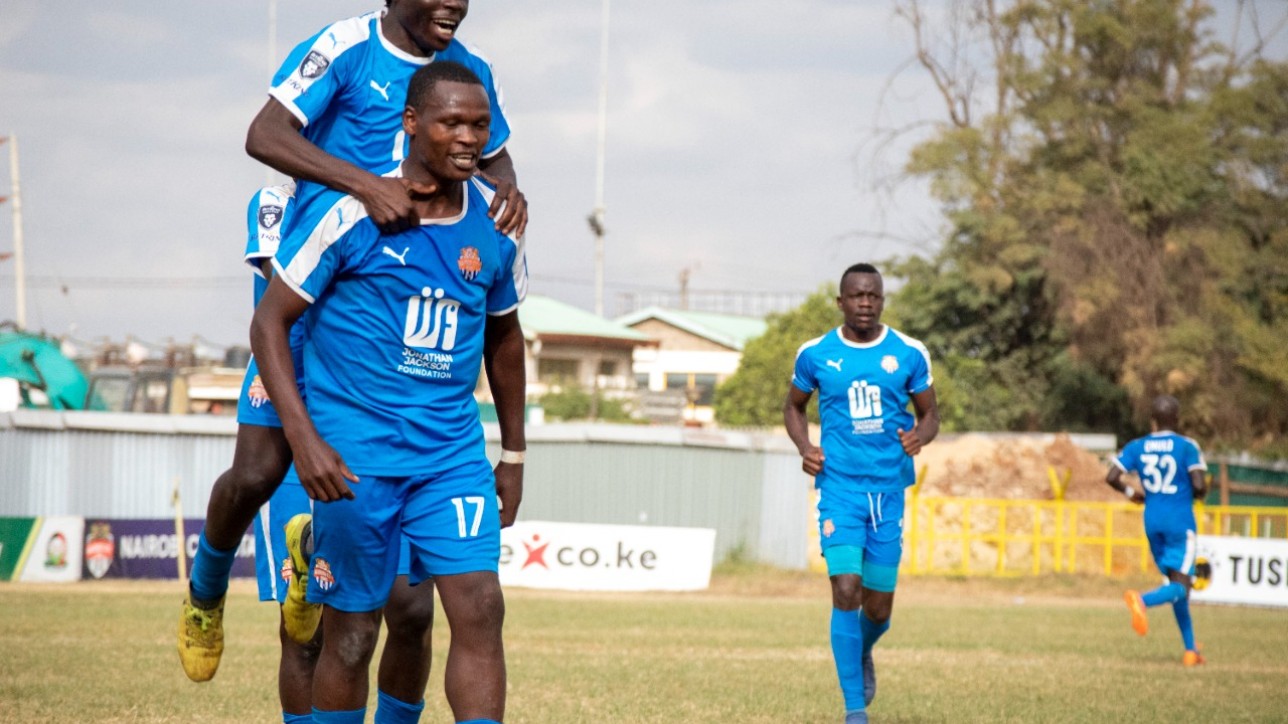 A goal on either half by Ezekiel Odera and Nicholas Kipkirui handed Nairobi City Stars a 2-1 win over AFC Leopards in a round 30 Betking Premier League clash played at Ruaraka on Tuesday 3 August 2021.

The win enabled Nairobi City Stars to set two new records of surpassing 11 wins and 43-points in a 30-game season set back in the 2009 season as the team finished in the sixth spot.

It was a record 12th season win that saw Simba wa Nairobi scale up to a record 44 points to settle at third.

Odera tapped home a cross from Bolton Omwenga in the 34th minute for the opener for a 1-0 halftime lead.

Leopards clawed back to tie the game three minutes after the hour mark with a sublime Washington Munene freekick.

Five minutes later, a ball from fullback Kevin Okumu that was first met by Timothy Ouma ended up in Kipkirui’s path who then fired a low shot home for what eventually earned all spoils for Simba wa Nairobi.

The game was cagey in the starting minutes but it is Leopards that had pressure on the hosts after forcing a corner and few throw-ins within 12 minutes.

A timid shot to City Stars keeper Steve Njunge by Elvis Rupia, after pouncing on a miscued ball from Bolton Omwenga, soon followed.

With good numbers in midfield, Leopards pinned down Simba wa Nairobi forcing four fruitless freekicks as the clock struck half an hour mark.

In the 32nd minute, Leopards keeper Benjamin Ochan let a ball slip towards goal; Timothy Ouma gave chase but to no good effect. He gave away a foul.

Within the next two minutes, a freekick by skipper Anthony Kimani ended up with Bolton far up the field and the left-back fired the ball to the box that received a flick from Odera for the opener.

Leopards response was immediate and two minutes later, Marvin Nabwire smacked the upright after getting to the end of a flowing move. From that near-miss, City Stars forced two corners that Leopards failed to account for.

Odera could have added the score minutes later but was caught offside once, then fired a Kipkirui pass just wide.

Had he been more precise, Harrison Mwendwa could have leveled matters for Leopards in the 39th minute but he fired wide while in the box.

The final three minutes to halftime saw Odera miss to place a free header when unmarked in the box after being picked out from the right by Kevin Chumsy Okumu.

A response on the other end by Marvin for Leopards, a wide shot, ended the first half.

At the start of the second half, Peter Thiong’o should have done better from a lost Bolton ball; but he shot wide.

City Stars then won two important freekicks but one by Bolton and the other by Muki were both wasted.

Not too long after, Davis Agesa and Timothy Ouma made it to the Leopards box only to fire wide and straight at Ochan, respectively.

A freekick from good range a minute after saw Munene dump the ball at the far right corner past a diving Njunge for the leveler.

But within five minutes Kipkirui restored City Stars goal advantage when he fired low past Ochan.

It was his last action in the game as he came off for Erick Ombija as Herit Mungai came on for Ouma.

The action continued within eight minutes of the goal as Odera – later named the games’ MVP – fired wide while in the box as Agesa drove low to force Ochan into a good save.

As expected, Leopards were dominant in the final minutes after bringing on Shaka for Munene.

Two back-to-back throw-ins from ingwe however failed to bring about the much-sought equalizer allowing City stars to carry the day.

With a second straight win that avenged a 1-0 loss to Leopards in the first leg at Kasarani, City Stars moves up two places from fifth as Leopards dropped to seventh with 41 points.

Next up for City Stars is a Saturday game with Mathare United at Ruaraka.