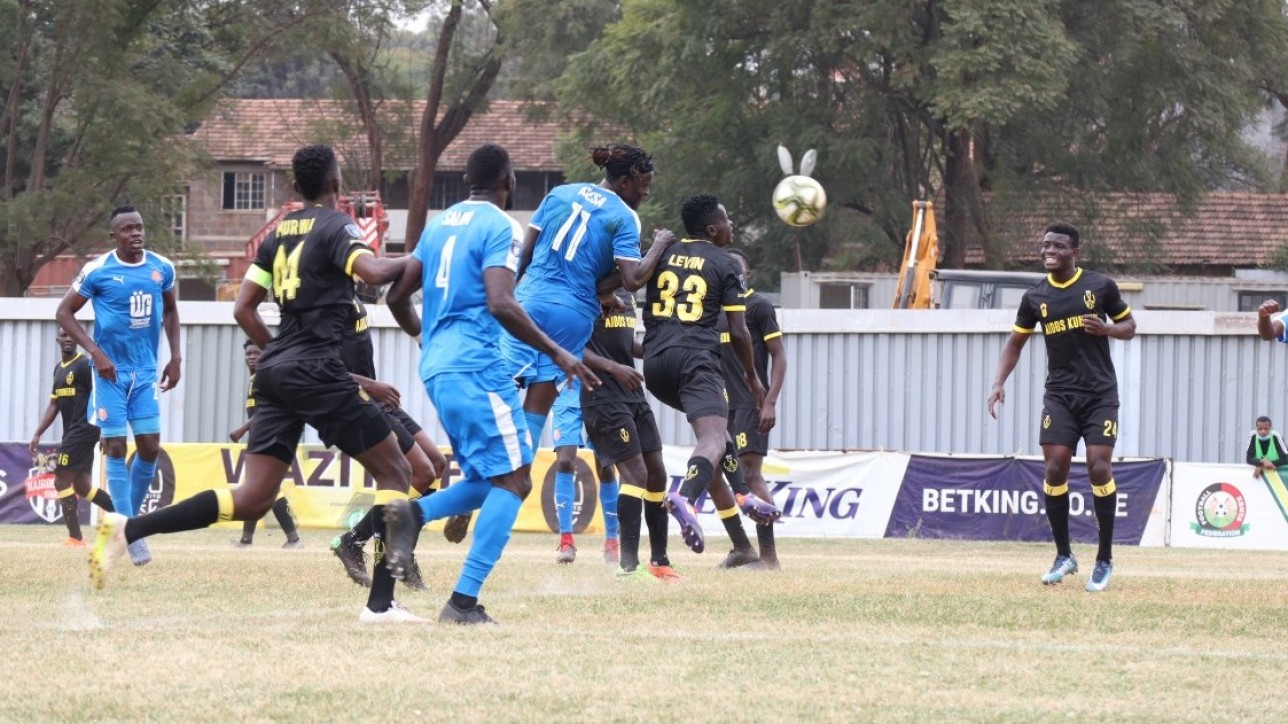 A lone strike by Musa Masika at the hour mark is what separated the two teams for Wazito to complete a double over Simba wa Narobi. They won the first leg 2-1 at Utalii in early January.

Wazito forced the first set-piece of the game in the seventh minute, a corner, but nothing much came out of it.

The next minute, a good flow by City Stars saw pocket rocket Rodgers Okuse Okumu break into the Wazito box only to be caught offside.

Okuse’s speed led to the bookings of Wazito’s Vincent Oburu and right back Ronney Onyango on either half.

In the eleventh minute, Musa Masika fired a freekick from the edge of the box straight to his former keeper Steve Njunge City Stars goal.

A minute after the hour mark, Wazito forced a second corner. As was the case with the first, it was wasted.

Inside five minutes after the half-hour mark City Stars had three half chances; a Sven Yidah’s belter – off a Nicholas Kipkirui knockdown – went just wide, a Bolton Omwenga freekick went straight to the keeper Frederick, then skipper Anthony Muki Kimani failed to pick out Davis Agesa in the box.

As the first half wore on, it is Wazito that looked most dangerous as Wyvonne Isuza, coming from deep, ran unchecked into the box, only for Njunge in City Star’s goal to force a fruitless corner.

The next minute Elli Asiche attempted a drive on goal. It flew wide.

Nothing to separate the two sides yet in what has been a very dull affair.#CityStarsVsWazito#BKPL pic.twitter.com/WIUGGqkXfC

Six minutes into the second half, City Stars wasted a corner and freekick.

The action then moved to the other end when, in the 55th minute, Masika’s low drive ended straight at Njunge.

At the hour mark City Stars striker Davis Agesa could have open the scores only to miss placing a Muki freekick.

And three minutes later it was Wazito 1-0 up when Masika met a pass across the top of the box to place the ball on his left foot before firing past Njunge.

At the 70th minute, Kipkirui just failed to trigger the ball home from a Maloba cross and moments later a Muki attempt on goal, from just yards out, off a Kipkirui bicycle kick, earned a corner instead of a leveler.

With 13 minutes left, Wazito opted to defend their solo goal with a triple sub that saw the arrival of Fidel Origa, Dennis Sikhayi, and Kevin Kimani in places of Brian Musa, Rooney Onyango, and Eli Asieche, in that order.

For City Stars, Ezekiel Odera came on for Kipkirui, as Calvin Masawa took up the place of Edwin Buliba at right back.

Into the last ten minutes, City Stars had near misses that could have changed the game but an Agesa attempt and Muki freekick, all in the box, failed to cross the line.

Even an extra two strikers in the dying minutes; Erick Ombija and Ebrima Sanneh for Sven and Agesa, could not change the course of the game.

But as City Stars chased the game, one move by Wazito could have ended the game at 2-0, but luckily a Masika drive ricochetted off the woodwork.

From the loss, City Stars, on 32 points, dropped to seventh following other Wednesday results, as Wazito moved up two places to eighth with 30 points.

Next up for City Stars is a Mombasa game against Bandari at Mbaraki on Sunday 4 July 2021 starting 3 pm.