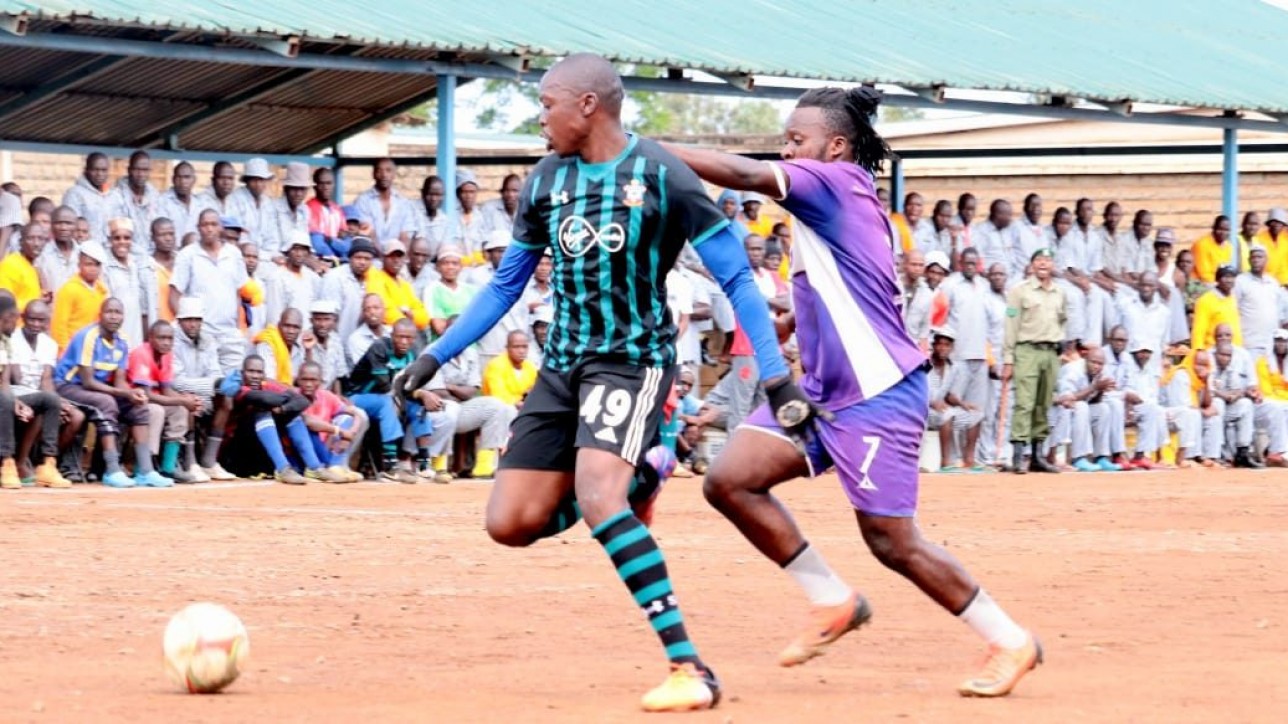 A big family made of Jonathan Jackson Foundation (JJF), Nairobi City Stars, Real estate firm Lordship Africa staff paid a courtesy call to Kamiti maximum prison for a get together with those serving varied sentences.

The group was accompanied by members of empowerment organization Mneti Huru a foundation made of ex-convicts as well as renown Tedium Rogers, an ex Mathare United player, who was recently released from the same facility after serving a 19-year term.

Collectively, the visiting lot was out to encourage the inmates, give them hope and tip them on how recoil back and be useful once they find freedom.

Other than take part in an exhibition game, the family presented the inmates with five GOTV subscriptions all paid for in full for the next one year as well as footballs for their soccer teams.

Jonathan Jackson, the City Stars chair and founder of JJF as well as Lordship Africa, said;

“We are here to give those at Kimiti hope that when they get out they have people like us to look up to.” Wainaina Kamau, a former player with Young Peles and Kawangware United who works as a community Volunteer with Mneti Huru, a setup that integrates and empowers ex-offenders through educative, trans-formative and sustainable initiatives at community level, said;

“As an ex offender I can tell you that getting acceptance back in the society is a tall order. We often come here to encourage those that we left behind,”

“To make it easier for them to seamlessly plug back to the society we talk to them about the need to acquire relevant skills while still in prison as that makes it easier for one to get a hussle once free hence a living .” Added Wainaina who served a year each at Kamiti and Nairobi West prisons

City Stars skipper Anthony Muki Kimani had words of encouragement and he said; “Do not despair. We are brothers and once you come out we will receive you and embrace you. We will hold your hand and help you get acceptance back to the society.” Rogers who was released in August 2019 from Kamiti said;

“I served my time here and through a series of appeals and prayer I was finally released after 19 years. It may have been a long time but finally it was God’s time that got me out. I return to Kamiti to give them hope as I am an example. At the right time all those in here will walk away and find their freedom just like me.”

Others who spoke during the visit included Moses Opula who was once in the ranks of AFC Leopards.

Opula, now an assistant coach appreciated the visit and asked for an early return; “We normally beat teams when they come here for a friendly. You beat us because you have a very quick and swift team. When you return we will tilt the tables against you.”

He went on to add; “We have 18 teams here and they gain quite a bit when teams like yours pay us a visit. We appreciate it.” Moses Opula speaking during the visit

In the game, City Stars took out the Kamiti inmates 3-0 with goals from Stephen Mweni and Ebrima Sanneh and a top up in the second half by Victor Jakadingding Okulu.