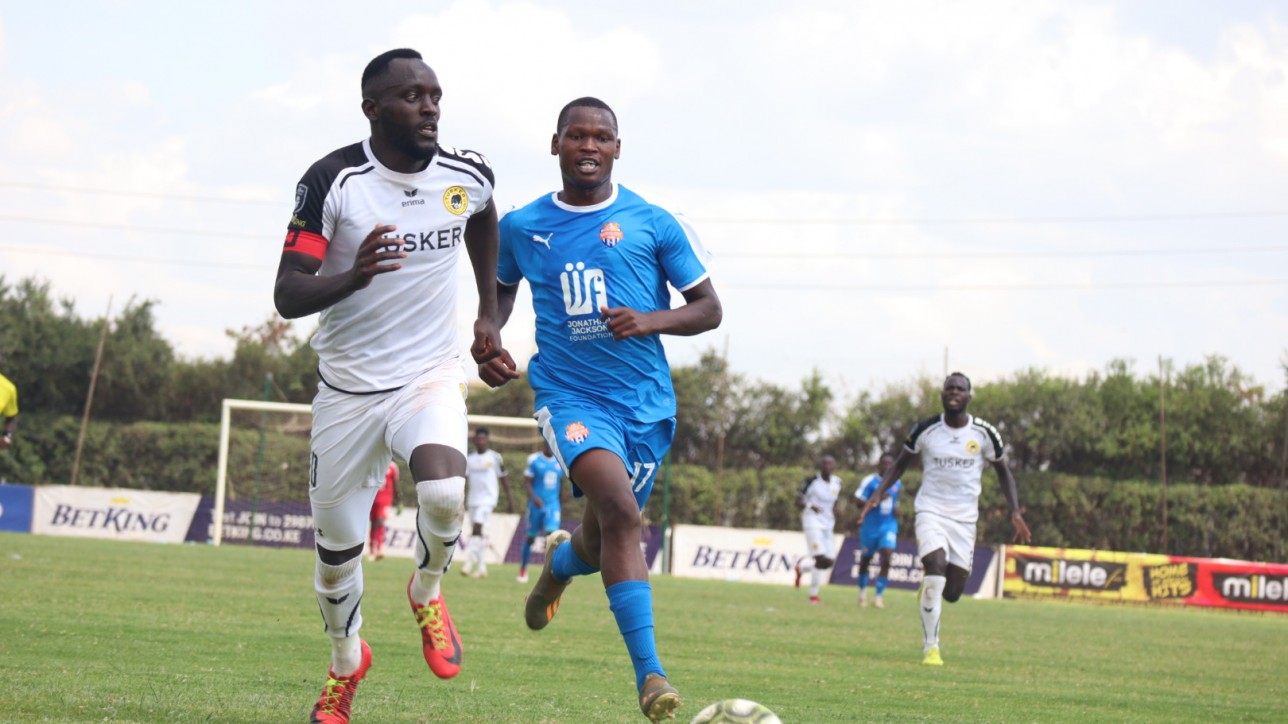 Nairobi City Stars and Tusker eked out a 2-2 draw at Utalii grounds in a round 16 premier league game played on the afternoon of Saturday 20 March 2021.

It was a tale of two halves, as City Stars’ Simba wa Nairobi went to the break with 2-0 cushion off two sublime goals from skipper Anthony Muki Kimani in the eighth and 18th minute to increase his tally this season to four goals.

But in the other stanza, Tusker called on their depth from the bench to level the game with goals from Kevin Monyi in the 52nd minute and substitute Chrispinus Onyango in the 77th minute to earn a sixth draw against City Stars since year 2004.

Inside the first five minutes had forced two freekicks from range off Muki and flyer Rodgers Okuse Okumu.

But it is the third off Okumu on seven minutes that counted for something as Muki stepped up to fire straight at goal past a perplexed Emery Mvuyekure for the first of the game.

Ten minutes later midfielder Sven Yidah took matters on his own hands and, from mid pitch, trailed the right channel into the box then squared the ball back for a charging Muki who smacked the ball home at the far post to double the lead.

It was Muki’s first ever brace for City Stars, and the club’s 15th Premier League brace  since 2004, that increased his tally to four to catch up with stalwart Peter Pinchez Opiyo as the club’s top scorers.

Right after the water break striker Erick Ombija got to the end of a Kevin Chumsy throw in only to fire wide.

Not too far off Bolton Omwenga had a near mess when he gave the ball away in the box but big centre back Kenedy Vidic Onyango came to his rescue to with a mop up job that saved the day.

At the half hour mark Macharia won the ball at the edge of the box after dispossessing stopper Salim Shitu Abdalla whose attempted dribble failed miserably. He played Meja in the box but Njunge picked it up to deny what seemed a clear goal. Shitu received a good scolding from his mates for the near goof.

That move came seconds after Muki, while on a counter, in seeking a hat trick, had attempted a lob on Emery that went wide.

Three minutes later Apolo Otieno struck a perfect freekick but once again Njunge was up to the task to save the stinger.

The minute after a relentless Muki attempted yet another lob off an Ombija knockdown whiskered just above earning a fruitless corner off a finger tip from Emery. He was to have one similar chance just before half time but his flick off Bolton’s freekick went, again, wide.

On 40 minutes Tusker threw away a glorious chance when another Meja-Macharia move saw the latter sky an effort.

At the start of the second half Tusker brought in Humphrey Mieno and Erick Zakayo for skipper Hashim Sempala who handed the armband to Eugene Asike, and Brian Marita, respectively.

Four minutes into the half Apolo sent a low dangerous freekick just wide but three minutes later, they got something out of nothing when right back Kevin Monyi lobbed the ball high that fortuitously dinked past a backpedaling Njunge who was off his line for Tusker’s first.

The next minute Tusker were marauding in the City Stars box again but Chumsy came to the rescue with a timely pick and clearance.

It was the trigger the log leaders needed as they went to high gear. Three minutes later Mieno fed Zakayo but his volley saw the skies.

A minute after the hour mark it was Tusker that we under attack when combative striker Erick Ombija zoomed into the box only to fire straight at keeper Emery.

Two minutes later Luke Namanda should have done better than fire across the face of goal when, from a few meters from the goal line, he wasted a Meja donkey work.

City Stars opted for changes after that attempt bringing on new signing Nicholas Kipkirui for his debut at the expense of Rodgers, and Davis Agesa for Oliver Maloba.

Tusker responded with the arrival of Chrispinus for Macharia and after the water break topped up with George Blackberry Ogutu for Luke Namanda.

Moments later it was level when a high ball into the City Stars box from Monyi was unchecked. It found Meja who fired at Njunge but his spill found Onyango who squared it home just minutes after coming on to the field of play for Macharia.

A rather rusty Kipkirui was then to fire at the side netting as the game wound down as Timothy Babu Ouma came on for Muki who shifted the armband to Shitu.

In the dying minutes Meja took a rest for Ochieng as John Kamau grabbed only his second league appearance this season taking over from a tiring Ombija.

The game ended with Babu missing out on hero status when, with the final ball of the game after being put through in the box, fired across goal when going for the far post.

With a new point, City Stars moved a place up to eighth place with 20 points from 16 games as Tusker stretched a point ahead from the chasing pack to the hit the 36-point mark from 16 games.

Next up for Simba wa Nairobi is a game against champions Gor Mahia in the 17th and final first leg clash on Sunday 4 April 2021 at Kasarani.